The Tale of Two Kitchens 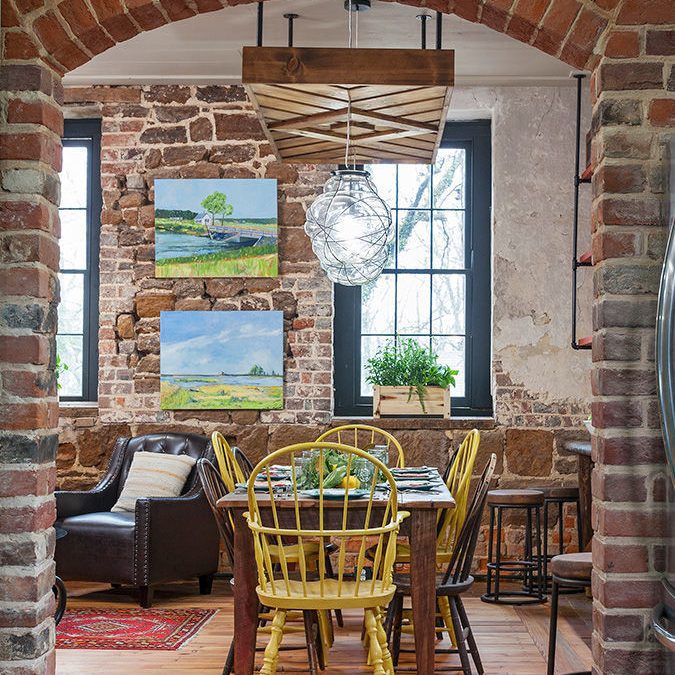 “The west wing tells a story that is completely different from that of the Tayloe family that lived in the main house.”— Catherine Emery 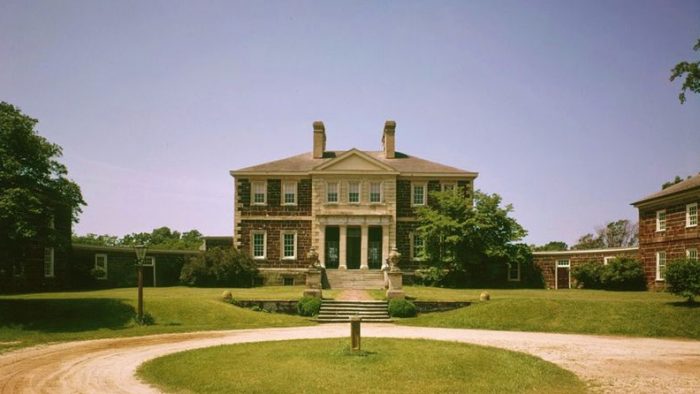 Built between 1748 and 1758, the Neo-Palladian stone mansion at Mount Airy Plantation is located on the banks of eastern Virginia’s Rappahannock River and is listed on the National Register of Historic Places. It is home to Tayloe Emery, an eighth-generation descendant, his wife, Catherine, and their two young sons.

To update the main home, two wings, and many outbuildings, the couple invested in a vast room-by-room renovation project. Interestingly, the undertaking was documented in 10 episodes of the HGTV show, “American Rehab, Virginia,” available on Amazon Prime. The scope of the work included two kitchens—one located in the main house and used daily, the other in the west wing for caterers and guests. Each has its history. 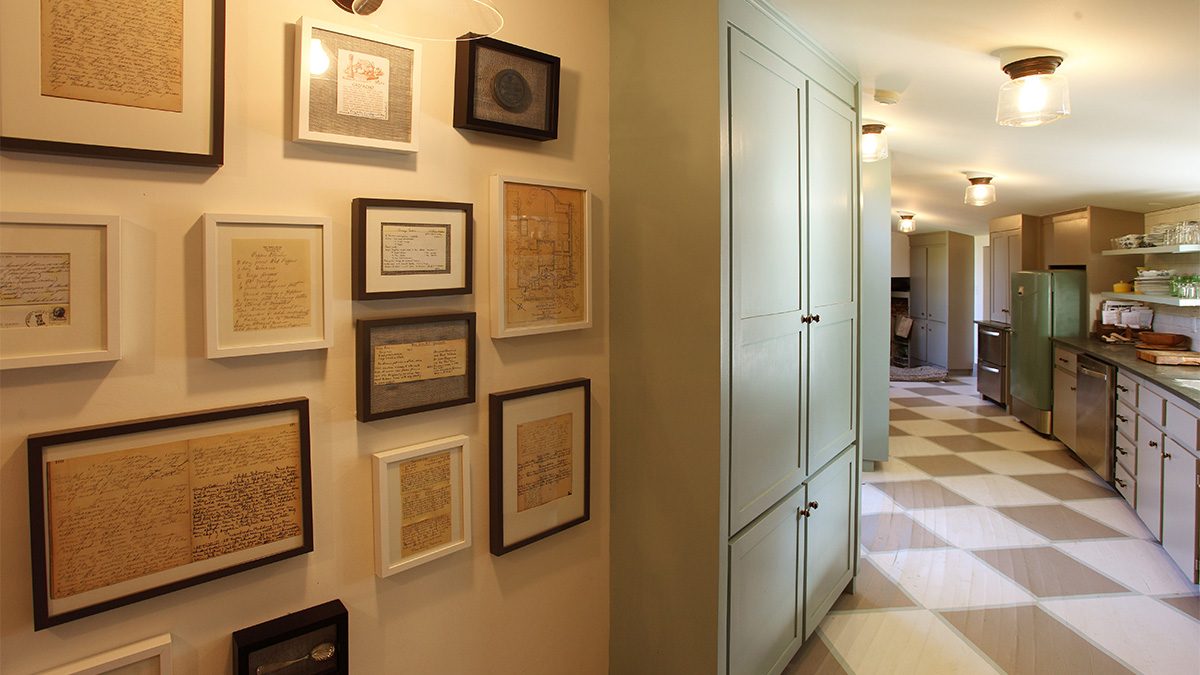 Situated in the hyphen between the main house and the west wing, the family kitchen is notable for its distinct curved shape. Originally a breezeway through which servants carried meals from the west wing kitchen to the main house dining room, it was turned into a kitchen in the mid-1960s. By the time designers, Beth Hendricks and Adrianne Bugg of Pillar & Peacock were called in, space was sorely outdated. 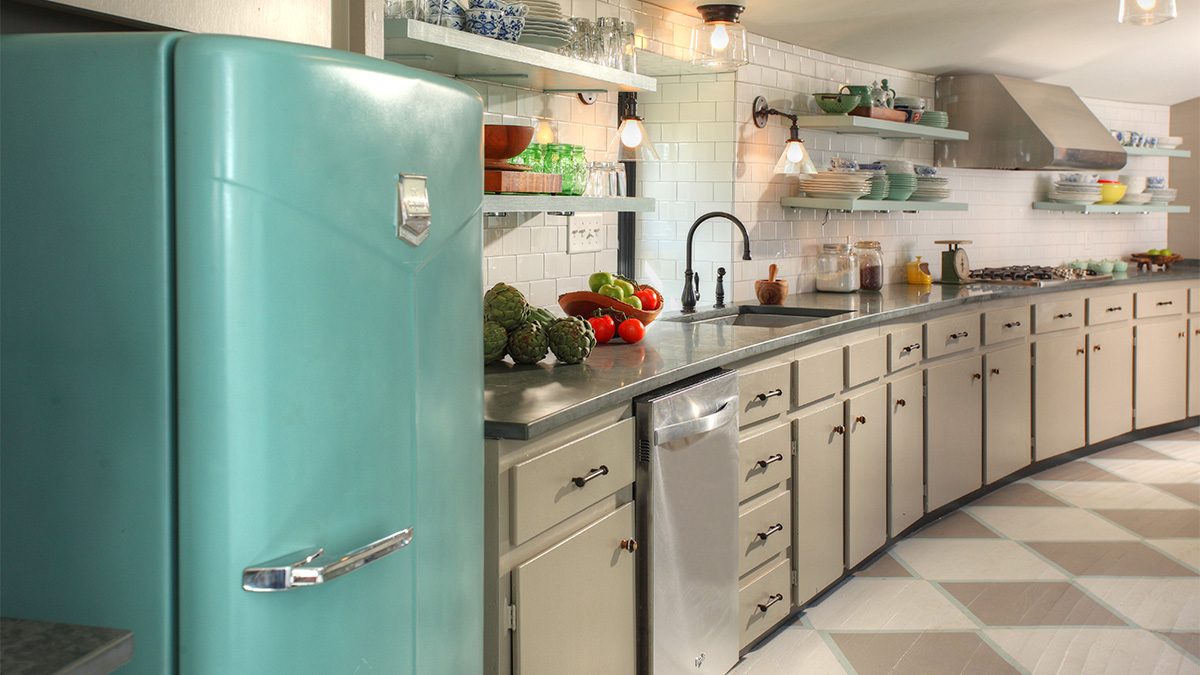 To start, they removed some of the 68 kelly-green cabinets. With cabinetry on both sides of the room, an oversized refrigerator eating into the floor area, and laundry units in the middle of it all, the corridor-like 12-ft.-wide Space was odd and uncomfortable. In response, all upper cabinets were removed and replaced with floating shelves, and floor-to-ceiling cupboards supplemented lost cabinet space. Other updates included new Buckingham Slate countertops, a refurbished vintage Hotpoint refrigerator, and new Schoolhouse Electric lighting.

Another significant move was blocking off one of the five doors accessing the room—which felt like too many—and turning another into a decorative Dutch door for added light and ventilation. Additionally, the trodden wood floors were stenciled with a diamond pattern, and the laundry facilities were moved out. 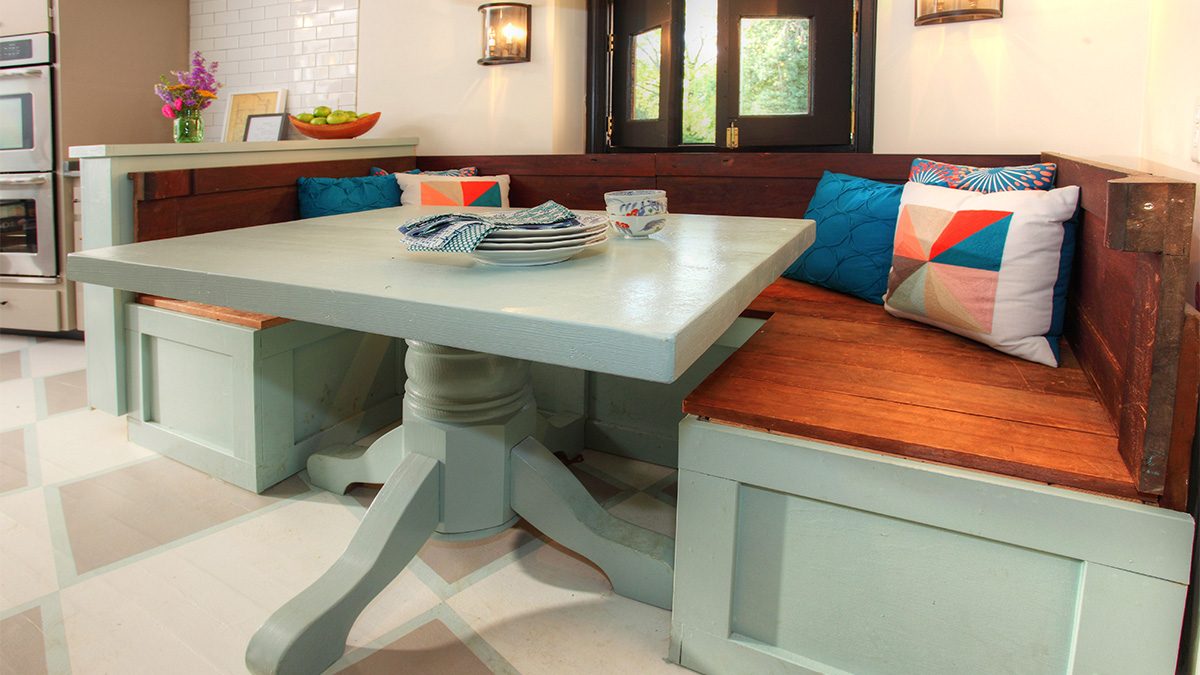 Seating was key to making the kitchen work. The team fit a custom-built banquette-style dining area to one end of the room. It was constructed from salvaged bed rails used for the table top, which sits on an antique pedestal base; and cupboard doors form the seat back.

Restoring the west wing kitchen was much more involved. It had been built separately from the main house to protect the house in case of a fire, and it served as the servants’ kitchen. There was no electricity, no plumbing, no floors, and no cabinetry. It hadn’t been touched in 200 years. 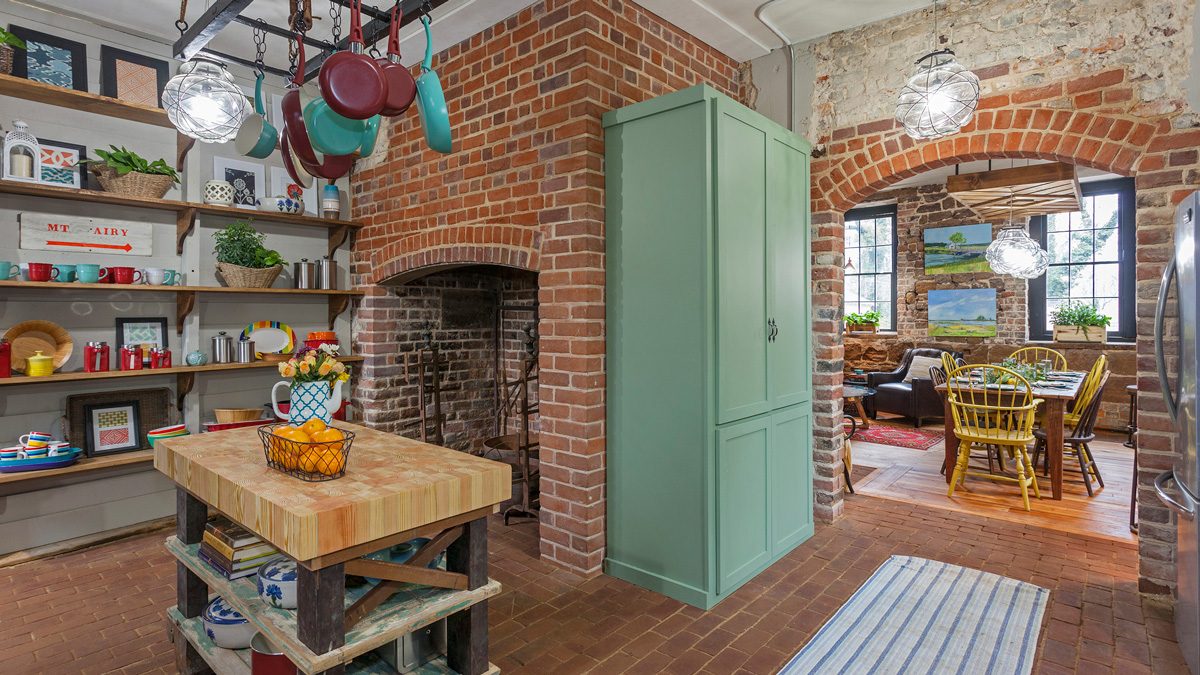 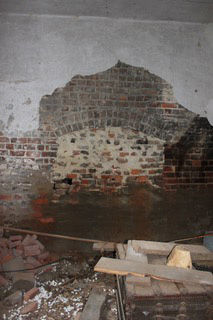 The first order of business was to restore the original fireplace, which was on the verge of collapse. The work was complicated by the fact that it was on a load-bearing wall. In addition to the settlement issues, the bricks were in bad shape. Masons installed a temporary steel support-beam system while they dismantled the deteriorated areas and re-created the footing. They also punched an arched opening on the same wall to connect the kitchen to the adjacent lounge.

Over the existing dirt floor, the masons installed a new brick floor. Working under the auspices of the Department of Historic Resources meant mortar was not allowed—anything covering the original floor couldn’t be permanent. Instead, the spaces between bricks were filled in with sand. Like the floor, black paint for the window trim was subject to approval; such materials had to be possibly original. Toward that end, they added open shelving with 18th-century-style brackets on three walls—thought to replicate the original layout.

Covered in 200 years’ worth of creosote, cleaning the ceiling required a lot of elbow grease. The team scraped and bleached it, then added stain blocker. Despite two coats of paint, yellowing came through; ultimately, multiple coats of paint were needed.

The homeowners had a vision for a DIY island. They repurposed cabinet fronts for the bottom shelving, and the butcher-block top was made from remnant pine, and fir framing materials cut into 4 in. Blocks and glued together. Above the island, they hung a pot rack made from a ladder that once connected the couple’s bedroom closet to an upstairs bathroom. 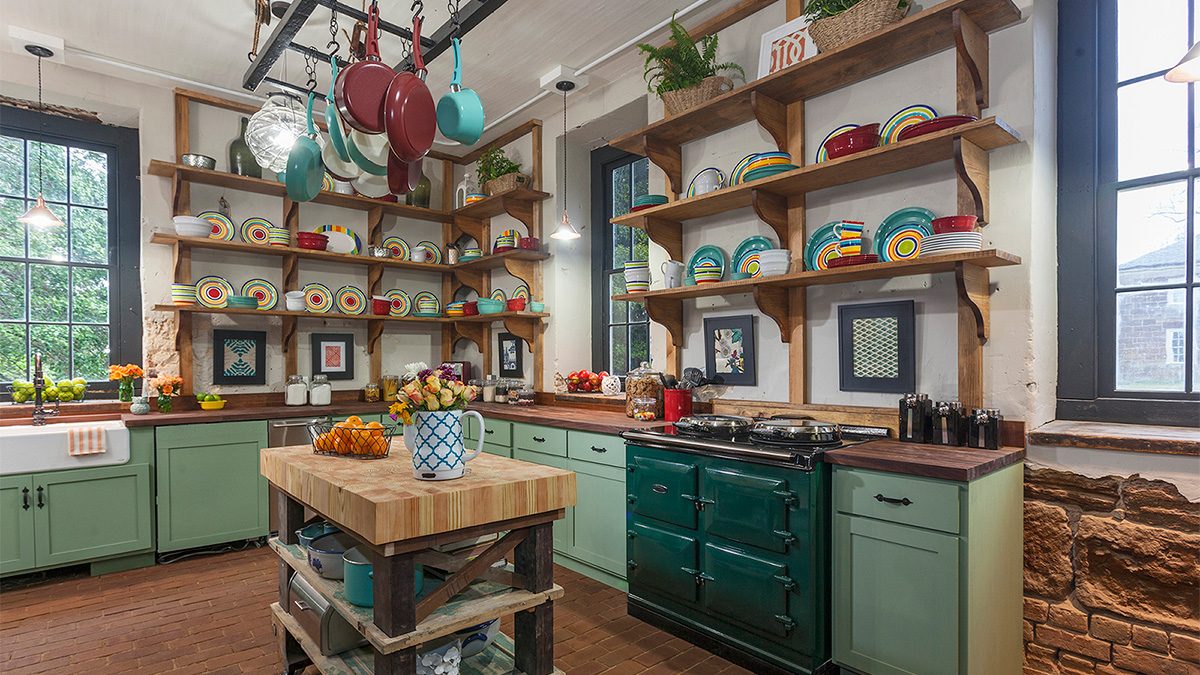 Salvaged materials lend this kitchen much of its character, which is enhanced by the new 1100-lb — cast-iron English cooker with three ovens that are used as a heat source as well as for cooking.

Further changes included the addition of a mudroom with laundry facilities to the first floor, and a bedroom with a private bath, which replaced storage space on the second floor.

Regarding the cheerful color palette, Beth remarks: “One reason this kitchen is so lively and bright is that it needed to show well on TV. We had to find a balance because we had two clients—the homeowners and the production company.” They found it.

Photos courtesy of Pillar & Peacock, except where noted

You can find out more about which cookies we are using or switch them off in settings.

This website uses cookies so that we can provide you with the best user experience possible. Cookie information is stored in your browser and performs functions such as recognising you when you return to our website and helping our team to understand which sections of the website you find most interesting and useful.

Strictly Necessary Cookie should be enabled at all times so that we can save your preferences for cookie settings.

If you disable this cookie, we will not be able to save your preferences. This means that every time you visit this website you will need to enable or disable cookies again.

This website uses Google Analytics to collect anonymous information such as the number of visitors to the site, and the most popular pages.

Please enable Strictly Necessary Cookies first so that we can save your preferences!